Park to be Renamed for Roy Wilkins 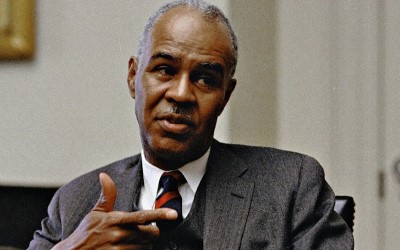 At their Jan. 14 meeting, St. Paul’s Parks Commission officially recommended that Lewis Park be renamed in honor of Roy Wilkins. The resolution now goes to the City Council, which is expected to approve it.

Lewis Park draws many families throughout the year looking for a safe and spacious place to bring children to play. The park features a playground with synthetic turf, picnic area, trails, a splash pad, and open spaces suitable for group activities and games. Hardly anyone remembers that this old park, created by plat in the 1880s, was simply named after the tract’s real estate developer John P. Lewis.

Saint Paul son Roy Wilkins spent his formative years in the home of his uncle Sam Williams, located one block west of the park on Galtier Street, and attended the former John Whittier Public School on the northern half of the block. All these buildings were demolished in the last 1970s for “blight clearance” and redevelopment.

Roy Wilkins campaigned tirelessly for civil rights both in Saint Paul and nationally as editor of the Saint Paul Appeal, an African-American newspaper, and later as executive director of the national NAACP.